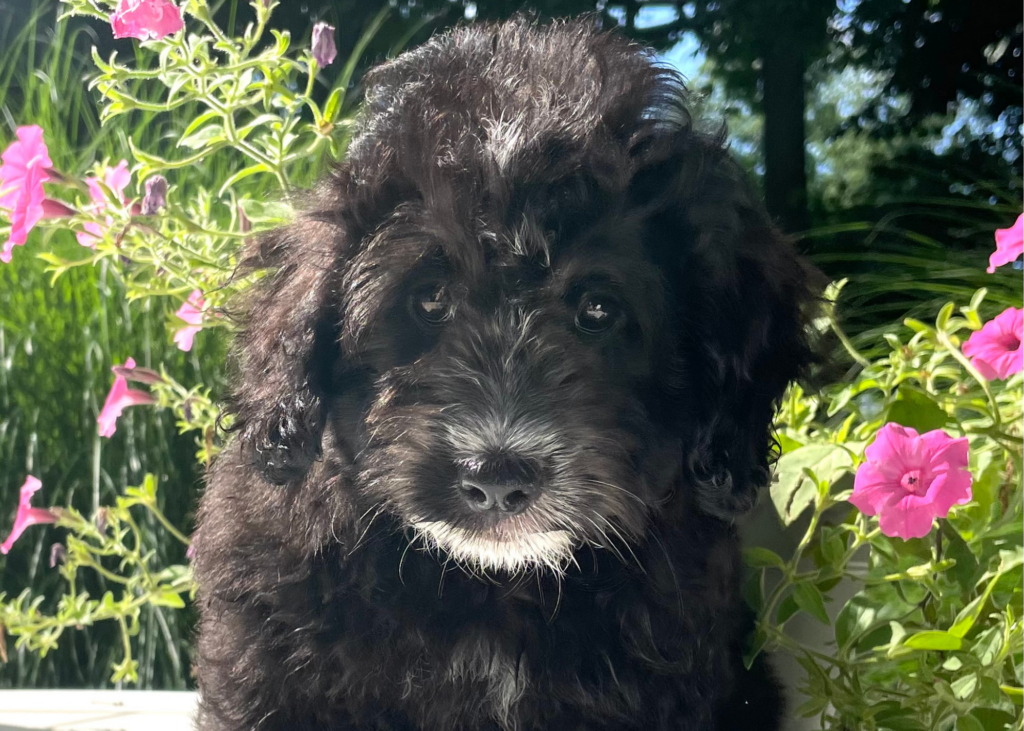 You may have met our eternal puppy, Fergus, before. I chronicled some of his more foolish and embarrassing exploits in this story:

Fergus is 100 pounds of (mostly) pure muscle, with a keen (though futile) interest in hunting down chipmunks. He chases them daily from drainpipe to tree trunk, always with the same result. Failure.

He is also an eternal optimist when it comes to interacting with our other dog, a geriatric wheaten terrier named Maggie. He believes, without a shred of evidence, that Maggie wants to play with him.

He’ll prance up to her, go down on his elbows, and make growly sounds with an open, smiley mouth and lots of pointy teeth. In reponse, Maggie will open her own mouth and snarl in fury. Encouraged, he will then lift one hefty forepaw and flatten her so that she spreadeagles on the floor. She then scrabbles around desperately, unable to get back to her feet until we help her up.

It’s to spare Maggie the pain and indignity of Fergus’s attentions that we’ve decided to bring a new puppy into the family.

The puppy we’ve chosen is a cross between a Bernese mountain dog and a miniature poodle.

The other day, we loaded Fergus into the back of the car and took him with us on our mission to decide which puppy in the litter we wanted to bring home. He was very excited to be going on an expedition — as I could see from his perked ears, shining eyes, and enormous grin.

When we arrived at the home of the puppy dealer, who had just returned from an overnight trip to Pennsylvania to pick up the pups, my husband took Fergus out on the gentle leader and walked him around the dealer’s front yard.

I, meanwhile, went to the backyard to meet the puppies. One by one, I lifted them in my arms and took them through the wooden gate to meet their potential big brother, who was pacing around with a worried look on his face and an enormous yardage of tongue trailing from his mouth.

The first puppy was extremely confident and playful. She ran up to me with a wagging tail, and didn’t seem at all dismayed as we approached Fergus, who had to weigh at least ten times more than she did.

The dismay was all on Fergus’s side. He took one look at the thing in my arms and backed up behind my husband. Then he leapt in fright, running his claws down my husband’s side, as if to say: “Save me from this dangerous morsel of a dog. It has a mouth full of fangs and a heart full of evil, anybody can see that!”

His attitude to the puppies changed ever so slightly as I brought them out, one by one, for inspection. His initial fear seemed to die down a little, to be replaced by a very pointed and exaggerated indifference.

The last puppy was a timid, shrinking soul, about as indifferent to Fergus as he was to her. At first, neither one would so much as look at the other. The puppy’s tail refused to wag when I turned her around so that he could sniff that end of her. Fergus wasn’t interested in any such sniffing. I turned the puppy back around again. And then — a tiny miracle. Fergus came closer. He looked at the little wriggling bundle in my arms. And then he leaned in —and the two of them touched noses for just a second.

I promise to report back on Fergus’s reaction when this rather nervous puppy arrives to share his home — in about a week’s time.