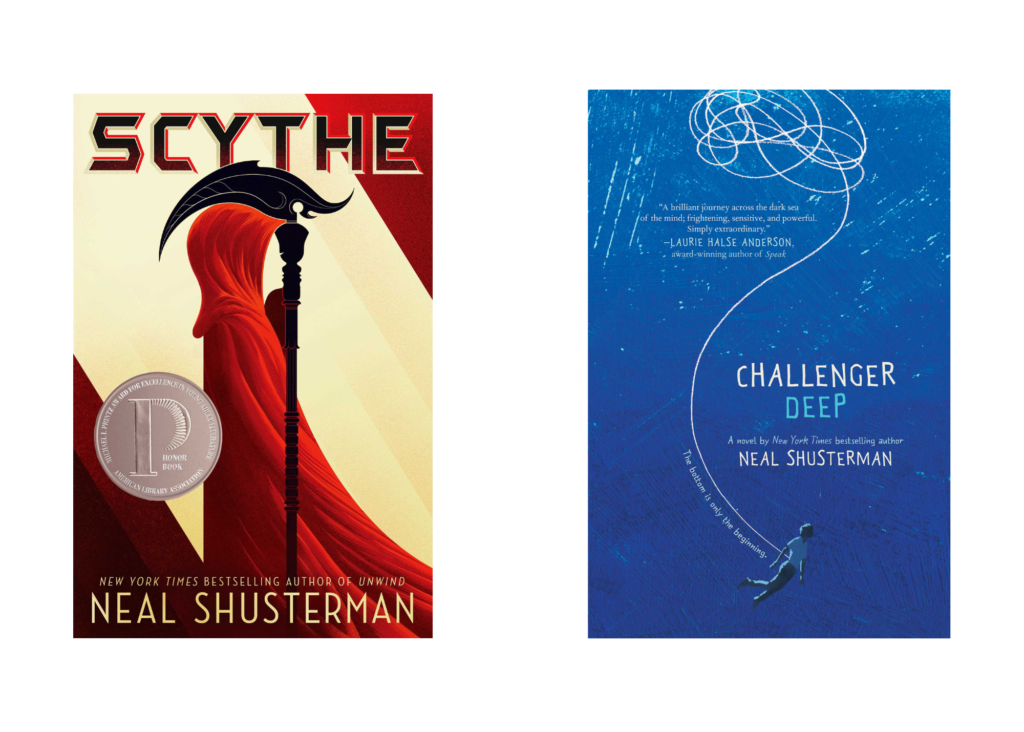 How do you save the world? One reader at a time.

Or so Neal Shusterman told 92 writers at Big Sur on Cape Cod, an annual workshop for children’s book writers and illustrators hosted by the Andrea Brown Literary Agency.

Mind you, when Shusterman began his career as a storyteller, all he wanted to do was calm down several cabin-loads of sugar-charged campers. Tell them a story, he thought. No more than a teen himself, he was a camp counselor hoping to head out for a bit of free time once all the kids were asleep. He came up with a riveting tale about a pair of sunglasses that could give you control of the universe.

His storytelling skills, refined in the furnace of summer camp with a live audience of restless kids, landed him his first agent, Andrea Brown, when he was still in college. Andrea remains his agent to this day, although he did try other agents when she was unable to sell his first two books, the second of which was based on the sunglasses story he had developed at camp. With hindsight, Shusterman recognizes that these books were practice manuscripts, and that he hadn’t mastered the art of worldbuilding.

While majoring in psychology at UC Irvine, Shusterman took ever creative writing class available and was so committed to writing that the head of the writing program invited him to sit in on the graduate classes. This professor game him some of the best advice he has ever received. “If you want to be a writer,” the professor said, “you need to stop writing science fiction and write outside of your chosen genre.” Shusterman wrote only realism until in his senior year-and in so doing, he learned how to tell a story about people. Now he writes novels where science fiction is sprinkled on top of stories about people

He writes the stories that scare him, the ones that keep him awake at night.

By this, he doesn’t mean he writes scary stories. He writes stories that grapple with difficult and thought-provoking issues.

Sometimes even he doesn’t understand where these stories come from. For example, when he was writing the SCYTHE series, he thought he understood the genesis of this fictional future world in which people can technically live forever and must be selectively (but compassionately) culled to prevent overpopulation.

He thought the origin of this story was his desire to write, not about a dystopian world, but about a world gone right, a utopia — and its attendant problems. In this way, he’d be able to differentiate his work from dystopian novels like The Hunger Games and Maze Runner. But then an interviewer asked him a question to which he hadn’t prepared an answer: “What was going on in your life at the time you wrote this book?”

That was when he realized where the idea for the book had really been born. His mother had suffered a series of devastating strokes–and he and his family had to make the difficult decision to turn off her feeding tube. She lived a further 29 days, dying on her 79th birthday in the arms of the people who loved her most. “It’s not the worst way to go,” he told us, and I don’t think there was a dry eye in the audience. “And that’s the real story of where SCYTHE came from.”

CHALLENGER DEEP, for which Shusterman won the National Book Award, also has a deeply personal origin story, but this time he was all too aware of it.

The title was one he stumbled on when helping his son with a school project about the Mariana Trench. Challenger Deep is the ‘very cool’ name given to the deepest part of the ocean. The name appealed to Shusterman, but he didn’t have a story to go along with it, so he used it as a placeholder title whenever he signed a contract for which he didn’t yet have a book idea.

And then his eldest son began to experience anxiety so severe that he believed his thoughts were responsible for causing earthquakes and other natural disasters. He was diagnosed with schizoaffective disorder. As he began to emerge from this crisis at around 20, Shusterman asked him what it had felt like when he was in the grips of his mental illness. His son said it was like being at the bottom of the ocean, screaming, but nobody could hear you.

That was when Shusterman knew what CHALLENGER DEEP would be about. With his son’s permission, he began to write a fantasy about a pirate ship in which the main character realizes his journey is nothing but a delusion and has to force his way back from the bottom of the ocean to the surface. Shusterman sent a draft in to his agent saying, “This could jrust be self-indulgent garbage, or it could be something.”

She read it and said, “This is your masterpiece.” And the rest is history.

His most recent novel, ROXY, written with his other son, Jarrod, takes on the subject of drug addiction, with the twist that the drugs themselves are portrayed as actual characters, rather like Greek gods. Roxy is the devastating prescription drug, Oxycontin. Shusterman is passionate about fundraising for the addiction recovery charity he supports, and recently co-hosted a charity art show with pairntings created by fine artist, Jonas Raider — who just happens to be one of the campers Shusterman told stories to decades ago.

The lessons Shusterman can teach writers are manifold. Practice, practice, practice, until you master your craft. Apply yourself to learning as much as you can from those around you who are further along the writing path. And most of all: dig deep into your own passions and fears to find the stories you really need to tell. And when you find them, don’t be afraid to tell them.