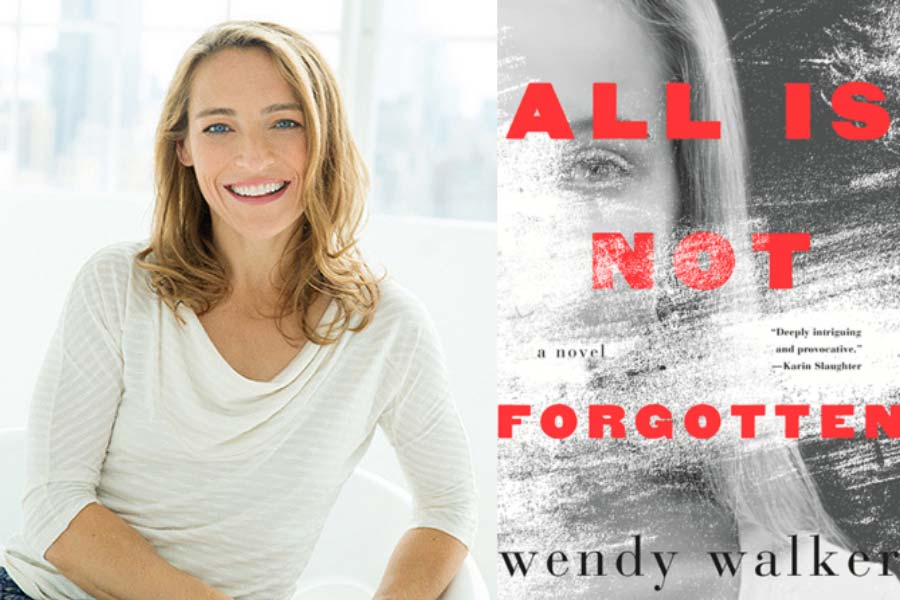 Wendy Walker lives in the next town over from me. She is a wonderful story-teller, and her persistence in the tough game of writing is inspirational!

1. Your earlier books were ‘women’s fiction’, and All is Not Forgotten is much darker, definitely a thriller. What made you change your focus? Were you influenced by novels like Girl on the Train?

My first two published novels were called Four Wives (2008) and Social Lives (2009). These books were in the genre of women’s fiction and involved stories of women in wealthy suburbs struggling with their identities, marriages, children, and former lives. I have lived in suburban Connecticut most of my life, both as a child and a grown woman, and I find it fascinating! But those books didn’t “break through” so I went back to practicing law. It was hard to give up the dream of being a writer, so I also managed to keep writing! I signed with a new agent and she loved my concept of a psychological thriller based on memory science. Gone Girl and Girl on a Train had created this new genre and editors were hungry for more. I was a bit nervous about switching genres, but I had always enjoyed suspense and thrillers and I was very interested in this story concept, so I dusted it off and wrote All Is Not Forgotten. It was great advice!

2. I know you’re the mother of teenage sons. Was it hard to write about rape in that context?

I am asked this frequently and honestly, it was not difficult in the way people suspect. I get very emotionally detached from my own life when I’m writing. I try to be in the head of my characters. In this book, Dr. Forrester is telling the story and he is at times detached and at times emotional so I tried to follow that path. Focusing on the words he would use at various points in the story kept my mind off of the events and on the choice of those words. What was hard was trying to write the violent scenes in a way that would stay true to the language and descriptions of both survivors and professionals who work with them. I did a lot research to see what that language was – how they want us to hear about what happened to them – and I worked very hard to walk that fine line.

3. Do you still write wherever you happen to be ( I remember you used to write in a minivan!) or do you have a more settled schedule and writing venue now?

Ha! That’s true. Those days are long gone, but I still consider myself a time scavenger. Every day, I map out how many hours I have until my kids are home, and then I squeeze everything into those hours. I keep waiting for it to get easier, but it just doesn’t. When the kids were younger, they were home most afternoons and evenings without much to do. I could often get household chores done then. Now, every minute from 4 until 10 is packed with driving and help with homework, so my daytime hours are always shrinking! The good news is that I can write at a desk.

4. What books are on your bedside table right now?

A pile of psychological thrillers which haven’t been released yet! I get asked to blurb books by other authors, which is quite an honor. I have read some really good ones. Look for The Twilight Wife and The Clairvoyants – both are out now.

5. Are you working on your next book, and will it be a thriller?

My next book is called Emma In The Night and it will be out August 8, 2017! I’m so excited about this book because it delves into narcissistic personality disorder – not the one we talk about casually, or even the one often used in books and movies. This new novel dissects the complex pathology of the psychological illness, which is actually quite rare. Here is a little teaser!

Three years ago, two sisters disappeared from their home in Southern Connecticut. Now, one has returned to tell the dark story of her time spent on an island off the coast of Maine. As the FBI searches for the island and the sister who did not make it out, we learn about the twisted past the girls endured in their own home before they left – and the truth about where they have been comes under scrutiny. Through the voice of our narrator, the sister who has returned, and the investigation by the FBI’s forensic psychologist, the stories of past and present converge in an unexpected ending.

6. Are you one of those writers who likes to plan every detail of the story before you start, or do you create on the fly? Does this change from book to book?

Because of the way my novels are structured, I have to plot everything from the very beginning to make sure the pieces all fit together. I write the different story lines onto colored index cards and then layer them into the chapters when they seemed to fit organically into the narrative. I am a meticulous plotter! Of course, things do change and grow as a character comes to life, and sometimes I will go back and make adjustments for that. In All Is Not Forgotten, the character Charlotte evolved quite a bit and as I decided to give her more depth, I adjusted the plot to accommodate this new angle.

7. When you’re not writing, what are your favorite things to do?

I love spending one on one time with a good friend or my fiancé, or having people to our home to cook dinner (I usually watch!). I also love skiing with my kids, yoga, and watching a really good TV series after a long day of work.

8. What is your idea of a perfect day?

Kids off to school, a quick run, 6 hours of writing with no interruptions, kids home, dinner, no driving, no drama, then a glass of wine and catch-up with my fiancé. A girl can dream!