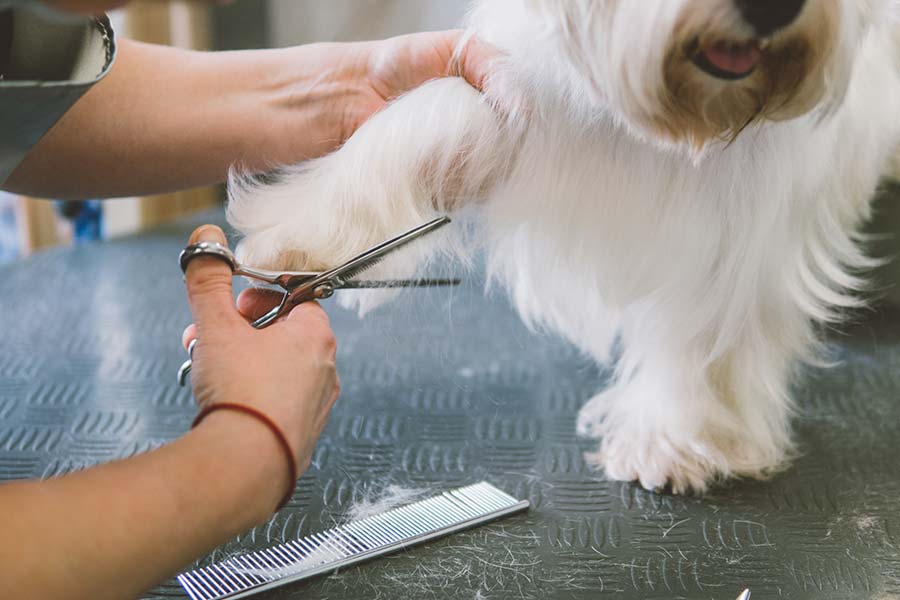 The mobile dog groomer came to our house a couple of days ago. Our dog, a wheaten terrier, had reached a degree of matted fluffiness that could no longer be ignored.  She looked like an explosion of fur, with no eyes to speak of at all–and her beard! Well, it was quite as revolting as the beard of an old man who trails his facial hair in his soup.

Now, don’t run away with the idea that we neglect this dog. We brush her. We wash her. We spruce her up. Often. It just doesn’t help.

We didn’t want to shave her completely, or ‘strip’ her as it’s called in the dog grooming trade, given that we had a couple of inches of snow on the ground and a good three months of winter still ahead of us. Besides, when she was last shaved, the children were traumatized to see what a shrunken, pink-skinned, skeletal creature lurked underneath the robust shaggy silhouette we were used to.

We had no choice but to do something, though–she was so matted that the vet threatened her skin would become oxygen starved. What happens to skin when it’s oxygen starved, I’m not quite sure. (I wasn’t really aware skin could breathe, in the first place.) But it hardly seemed fair on the wheaten terrier to wait and find out.

My husband came home with a scrap of paper he’d torn off a hand-written flyer on the message board at the supermarket.  “Wouldn’t the kids love it if a doggy parlor pulled up in our driveway?” he mused.

I was less optimistic about the probable entertainment value of the mobile dog groomer, but I felt that a small business owner might be more respectful of her client’s wishes than our usual doggy parlor was. At the place we normally take Maggie to, a disdainful teenage girl tends to insist that we sign a release allowing the parlor to ‘strip dog if necessary’.

When I spoke to her on the phone, the mobile groomer lady–let’s call her Barb–seemed willing to humor me. “We really don’t want her to lose her whole coat, if you can possibly save it,” I told her. “She has some matted patches–maybe you could comb through them? Or cut them out?”

On the day, the big white van showed up in our driveway an hour late. It was just like waiting for the cable guy. “Sorry, but I had to clean up the van,” she told us briskly. “The last dog I had in there threw up all over the place. Boy, could he projectile vomit. It’s still kinda stinky.”

“Want to look inside the lady’s van, kids?” my husband asked. But they slunk off without answering.

Barb then bent down to run a knowing hand over our terrier’s quivering body. Poor dog, she seemed to realize that this wasn’t a social call.

“She sure has a lot of mats,” Barb said. “How about… how about if I just trim her coat a little, make it more manageable?”

My husband and I looked at each other and shrugged. “Okay, but we don’t want her shaved,” we told her.

She led Maggie out like a lamb to the slaughter.

I was on the computer when, a surprisingly short time later, I heard Barb’s voice from the kitchen. I hurried along to investigate. To be honest, I had misgivings.

But my misgivings didn’t prepare me in the least for the sight that met my eyes.

Maggie was straining on the leash, her eyes bugging out of her head. At first, I thought the woman had done nothing to her at all. Then she moved and I saw her from the front.

Maggie looked like a kid’s drawing of a sheep–a fat little cloud, with two skinny sticks in the front for legs.

I looked at my husband, who was already in the room. He shook his head, speechless.

I looked at Barb.

“Sorry,” she said. “I couldn’t do it. Her mats are too close to the skin. I was afraid of hurting her. You’ll have to take her to an animal hospital.”

“But–but …” I gestured at Maggie’s front legs. They were roughly shaven, thin as pencils emerging from her great shaggy coat.

“I had to stop,” Barb said. “It was getting dangerous. Tell you what, I’m not going to charge you.”

Five minutes later I was on the phone to our usual doggy parlor. They were able to take us first thing the next morning. As I walked in, the bored-looking teenager exhibited a small jolt of animation as she took in Maggie’s haircut. “Has the dog had surgery?” she asked.

The girl shook her head and went back (big time) to bored-and-disdainful mode. She pushed the form across the counter to me, the one authorising the parlor to ‘strip dog if necessary’.  I signed without a whimper.